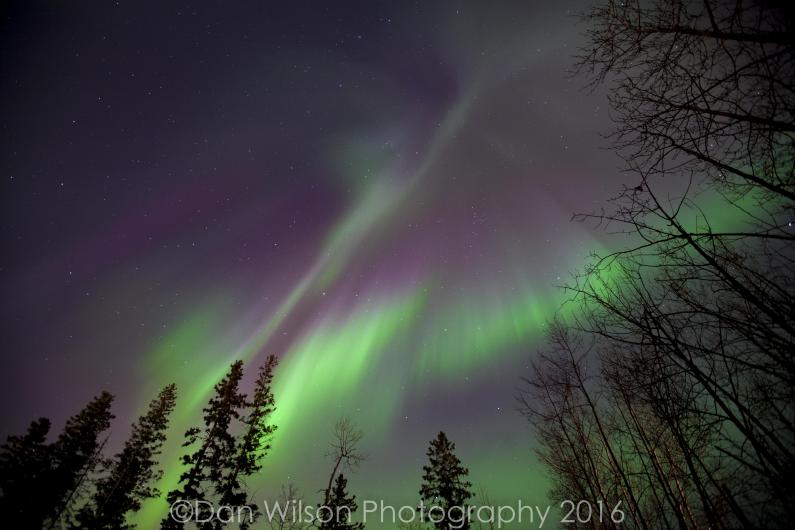 The Aurora Borealis, commonly known as the Northern Lights, is a natural phenomenon caused by geomagnetic activity in the upper levels of Earth’s atmosphere. The effect is a mesmerizing, dynamic display of light that appears in the northern skies. The magic and mystery of these brilliant waves of color dancing in the cool night air is like nothing else you’ve ever seen, an experience that attracts visitors from around the world.

The best time of year to get a good view of the lights is in the winter, when long periods of darkness and frequent clear nights provide good opportunities for viewing. But the aurora can appear at any time of year.

Because the Northern Lights occur near the North Pole, one of the best places for viewing in North America is northwestern Canada — the Yukon, Nunavut, Northwest Territories, and Alaska.

The best time to view the Northern Lights is around midnight, but it’s not unusual to see them anytime between 9:00 p.m. and 3:00 a.m. Cloud cover, a bright moon, and “light pollution” can affect visibility. The darker the sky, the brighter the colors. A real-time monitor of geomagnetic activity in the Edmonton area is available online at AuroraWatch.

Naturally, everyone wants to capture photos of the spectacular display of the Northern Lights. Experts recommend using an SLR camera with a wide angle lens and high-speed film, 200 to 400 ISO. Use manual settings and turn off all automatic features. You’ll want to use a tripod and cable release, and vary exposures between 15 and 60 seconds. Don’t use filters, and carry extra batteries in a warm place, because cold temperatures can cause them to lose power.

In Canada, there are a lot of prime places to view the Northern Lights in the winter months. Fort McMurray is located under the southern edge of the auroral oval in northern Alberta, making it an outstanding spot from which to view the lights. It is a prime location for viewing, as it is located within the auroral band that roughly centers on the 65th parallel, giving spectators the privilege to watch the Aurora Borealis dance most cold, clear evenings from October to March. Jasper National Park is distinguished by a town right in the center, but it’s still a great location for stargazing and catching a glimpse of the lights. Beaver Hills is just 45 minutes east of Edmonton and is home to a dark sky preserve of 293 square kilometers (113 square miles). It’s even possible to enjoy the aurora as far south as Cypress Hills Interprovincial Park. Because of its elevation and lack of “light pollution,” the sky in the area is quite dark and can make for good viewing.

One of the easiest ways to experience the breathtaking drama of the Northern Lights is to round up a group — friends and family, civic group, or youth organization — and charter a coach to a prime viewing place. A charter enables you and your party to travel safely and comfortably at an affordable price.

Seeing the Northern Lights is something everyone should do at least once in their lifetime. Pack your patience — the lights appear on their own schedule — grab your snowshoes, fill a thermos with hot chocolate, and head out to a prime viewing area for an experience you will never forget.

Let Diversified Transportation help you plan your Aurora Borealis viewing experience in Fort McMurray! Contact us today to set up a charter trip for your group and plan an experience like none other.